Can you escape the thrill of escape rooms? 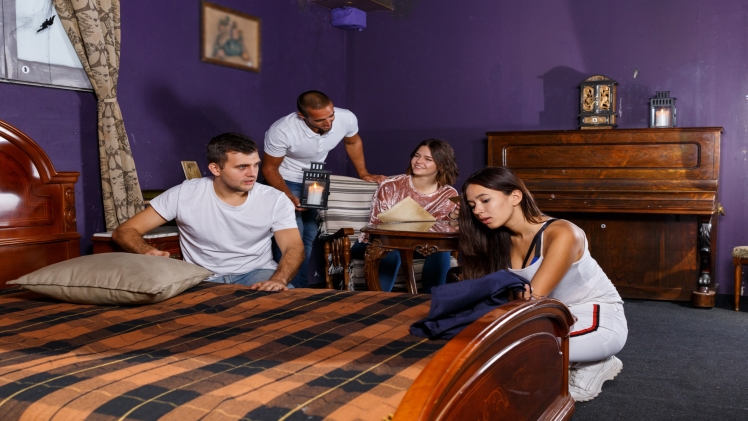 Picture yourself in a dark, dingy log cabin. The smell of damp wood creeps into your nostrils and makes thinking straight a challenging affair. Suddenly the door bangs shut behind you, locking you inside with no way to escape. You strain your ears to hear any friendly voice offering help but can only hear your heart thudding against your chest. You come to a sinking realisation that you may be trapped forever!

If you and your friends are escape room beginners, this sensory overload will certainly make your entire experience worthwhile.

What are escape rooms?

“Escape room” is an activity where you and your teammates are locked in a confined space. You have a limited amount of time to unearth clues to solve specific puzzles so as to, you guessed it, escape the room. The size of your team can vary from 2 to 8 players, with beginner-friendly rooms offering a better experience in a smaller group size of 2-5.

A brief history of escape rooms:

Escape rooms appeared first on the internet in the early 2000s. Following their popularity, the first live escape room appeared in Indianapolis, USA 2003. It was a live-action role-playing game that stressed puzzle solving. Then, an escape room opened in 2007 in Kyoto, Japan. It more closely resembled the video escape games – with a series of challenges, solving which you could finally escape. However, escape rooms aren’t necessarily a novelty. There were old-school television shows like Crystal Maze, Knightmare, and The Adventure Game, which incorporated the same concept. Their popularity is only increasing, and now there are around 50,000 escape rooms worldwide.

Escape rooms first made an appearance in Australia in 2011. As of 2021, there are more than 110 of them spread across Sydney, Melbourne, Perth, Darwin, Adelaide and other parts of Australia. On average, the time limit is about 45 – 60 minutes to escape, and it costs 40-50$ per person, based on the size of the team.

As with most games, escape room games come in three levels of difficulty – beginner, intermediate, and advanced. If you and your team are escape room beginners, you should try an escape room that is high on a story and immersive elements. It feels more like an adventure and less like a task. The puzzles will be challenging but straightforward; however, solving them in a closed room under a time limit will be a new experience that will test your ability to stay calm in tricky situations.

If you have some prior experience with escape rooms, you must try the intermediate and advanced rooms where the clues are hidden away more craftily, and the scenario is designed to induce quite a bit of panic.

There is no hard and fast rule, though, that says you must visit escape rooms in this order. Complete novices have a great time in advanced level rooms and vice versa.

Escape rooms offer an opportunity to spend quality time with your friends and family. Increasingly, families are planning holidays and birthdays in escape rooms. Organisations are beginning to show preference to escape rooms as effective team building activities. Here are some of the advantages of engaging in escape rooms:

Top escape room organisers take utmost precaution to ensure the mental and physical safety of participants. Most of them are suitable for supervised children, and some are even under the constant observation of a staff member who intervenes in case of an emergency.

Go ahead, rise to a challenge and participate in an escape room game today! Be it with your family, friends or colleagues, come together and enjoy the jubilation of escaping a difficult situation.