For galaxy fans, the Star Wars Cards Against Humanity is comming 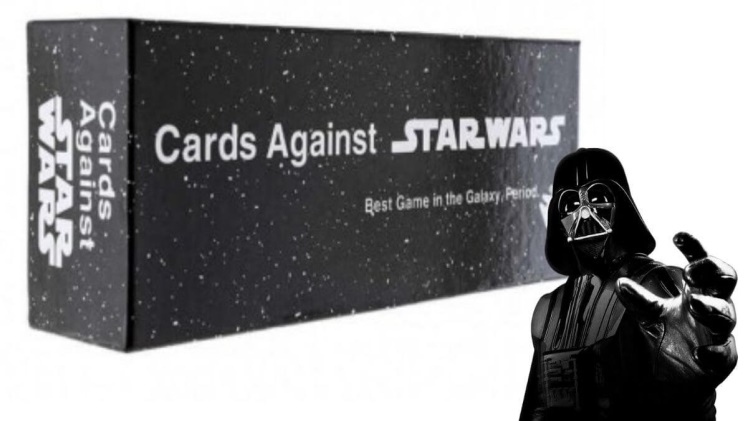 In a galaxy far, far away….there was a card game. Yes folks, Star Wars Cards Against Humanity has arrived!

This is for all card game lovers who have enjoyed this deviant party game, either in its original format or the themed editions like Cards Against Muggles & Cards Against Disney. Those miscreants behind the making of these board games have now come up with the ultimate version. When two cultural phenomenons collide head on – Cards Against Humanity & Star Wars. So with crude and toilet humor, it is time to turn to the Dark Side!

If you have played any of the alternate versions of this card game, Cards Against Star Wars plays just like the others. Each player will take it in turns to read from a question/statement card while the rest will choose from their own selection of answer cards what best fits. The answer is not so much finding the most accurate Star Wars canon reference but what is more humorous or the most extreme example of bad taste. Each answer will be read out, complete with the original question/statement, and see which cards leaves everyone in the most fits of hysterics or utterly appalled, and that will be your winner for the round.

But remember, this is not a game for kids or those easily offended. Just because this game will include the cute Ewoks and Jar Jar Binks does not make it suitable for underage players. And make sure Grandma doesn’t find it and think it will be a great family game for a Sunday afternoon with her grandkids. There is an age restriction printed on the box for a reason, only for the adult of 17 years and above.

Of course, this game will have such a wide appeal for everyone considering how long the Star Wars universe has been in our consciousness. With the first film emerging in 1977, this movie franchise has been with us for over 40 years. That means that it is loved and adored by the young (over 17 anyway) and old who can appreciate the subtle and not so subtle humor of the party game.

Now that we have all immersed ourselves in the rude, lewd and crude world of Cards Against Humanity, it is an easy step to take a twisted eye over the Star Wars universe. How stiff did Han Solo really get in the Carbonite? Why is Luke Skywalker always practicing with his “lightsaber”? Why was Watto so keen to keep Anakin with him at the workshop? Why did Queen Amidala keep Jar Jar Binks close to her all the time? Was it something to do with his long tongue? And as for those Ewok parties!!

To see the gutter level of humor on the cards, here are some examples. One of the black question/statement cards read: “After ‘blowing up’ the ‘Death Star’ the ‘Rebels’ celebrated with *____*”. Some white answer cards read: “Squelchy sex with Jabba”; “Getting an erection in a ‘Storm Trooper’ suit”. Other inappropriate answers include: “Yoda’s package”; “Darth Maul’s bedroom eyes” and “Reaching out and touching someone with your force”.

As you can tell, Cards Against Star Wars is on a similar par with other versions of every popular party game. That is to say, its heart and mind is set firmly in the gutter when it comes to poor taste. Which is probably where most of its players keep their minds attuned to. For all those who often wonder what happens on the Death Star in the crew dormitories, the palatial palaces of Naboo or the huts in the forests of Endor, then this is your time to find out. The questions you have had at the back of your mind can now be brought out in the open and cause heightened states of merriment at the same time.

So what are you waiting for? Get to it and buy a set so that you can surprise your family and friends. For a great game night, complemented by large quantities of pizza and beer, the card game will have everyone in fits of hysterics and tears of laughter.

Cards Against Star Wars – May the Farce Be With You!