How to store cutlery – our tips 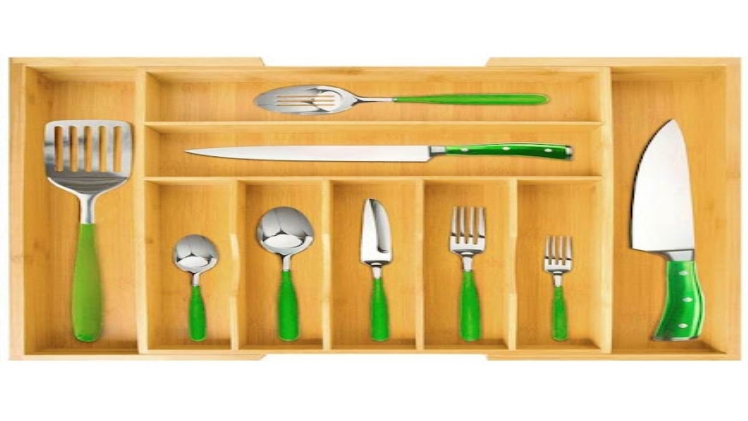 The kitchen is such a room where everything should have its place and always be at hand. This statement also applies to cutlery. You can store cutlery in the kitchen in different ways. A convenient and practical way to organize cutlery storage in the kitchen is specially designed kitchen trays – drawer dividers and organizers, usually installed in low drawers.

Such cutlery storage in drawers does not take up space on the desktop. And all items are laid out in separate sections, in a conspicuous place. This makes it easier to find a suitable device. A tray is often used to contain kitchen cutlery, placed in the shallow upper drawer closest to the sink.

The storage of cutlery in drawers can be divided into two types. This is the storage of items in standard one-piece trays. And hold in specialized organizers with internal dividing and organizational elements.

Kitchen drawer trays are designed for sorting and storing cutlery and kitchen utensils. Cutlery trays or expandable drawer organizers can be made from different materials. Most often, it is plastic, stainless steel, and wood.

Plastic is the most popular material due to its practicality and relatively low cost. The stainless steel tray can be smooth or perforated. Beech is most often used as wood for organizers of elite kitchen sets and coated with special oil impregnation and colorless acrylic lacquer for moisture protection.

The sizes of kitchen trays – liners for cutlery vary from 300 mm to 1200 mm. Plastic trays have margins around the edges that can be trimmed. For example, a construction or clerical knife to fit the liner to the width and depth of the size of the drawer. To do this, you first need to measure the drawer’s interior. And based on measurements, if necessary, cut off excess plastic from the sides and back of the tray.

The smaller the width of the kitchen tray, the fewer compartments, and cells in it.

There are also cutlery trays with drawers. With the help of one or two drawers located on the sides of the organizer, you can adjust the tray to the width of the drawer. And in the most retractable section to store cutlery

You can also find two-level or double trays for kitchen appliances. One level of the liner is above the other, and the top-level extends and retracts as needed. And although this design saves space, it is not entirely convenient because the upper level can ride on its own.

If we talk about organizers for cutlery made of wood, then this line has special expanders. For example, in a drawer with a width of 700 mm, you can install an insert designed for a base of 600 mm and an expander of 90 mm. Also, among the beech organizers, you can find liners already equipped with cutlery or kitchen utensils. The kitchen organizer kit can contain such kitchen utensils as various knives, an ice cream spoon, an opener, a corkscrew, a manual grater, a garlic press, a potato peeler.

Cutlery trays can be combined. They are made from several different materials—for example, wood and stainless steel.

As mentioned above, organizers designed for storing cutlery in drawers may have exceptional mobile thickness and cell size, regulators. Such liners are made of plastic, metal, or wood. The size of the cells of the kitchen tray is adjusted by rearranging the dividers. It is worth noting that the partitions can be installed not in a separate tray but directly in the drawer. In this case, it is better to lay a special protective mat on the bottom of the box.

In most cases, kitchen trays designed for storing cutlery in roll-out drawers are easy to remove, and some can even be washed in the dishwasher (prepared with Royal Craft Wood).