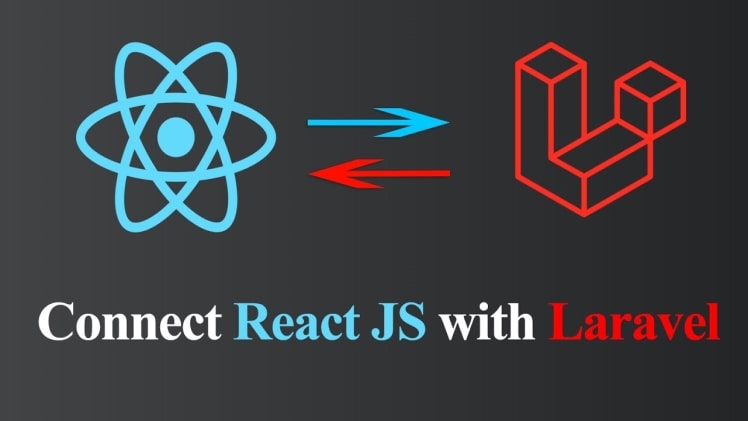 Laravel is often associated and paired with Vue.js for full-stack web app development projects. Infact, in the earlier versions of Laravel, Vue.js used to come preinstalled. However, as the Laravel community grew, and so did its popularity and potential, developers started speculating and pairing it with other modern frontend/UI frameworks. Although Vue.js is a promising frontend framework, React.js is rising the charts, becoming one of the most popular JavaScript frameworks today. As per Statista, React.js is the most preferred web framework among developers in 2021, with 40.14% votes. Nowadays, the developer community is seeing a rise in a new popular duo, Laravel and React. Before seeing how Laravel and React work together, we should understand the two technologies separately first –

Laravel is an open-source PHP framework developed to ease/reduce the efforts of developers by streamlining common tasks required to be undertaken in most web projects, like routing, caching, authentication, and more. It is a server-side backend framework used to build customizable web apps. It uses the Model-View-Controller design pattern and relies on data manipulation. Laravel isn’t focused on aesthetic appeal or flashy user-friendly features, but it acts as a robust foundation to build a scalable, secure, and powerful web app.

There are many PHP frameworks, each capable and worthy in its own right. However, this begs the question, why Laravel? What does Laravel offer that makes it a better choice than other backend PHP frameworks?

Laravel comes with many efficient and noteworthy object-oriented libraries that have amazing capabilities.

Laravel has Eloquent ORM that provides Laravel developers with an implementation called ActiveRecord, which eases and reduces the time taken for the database interaction process. Developers can use PHP syntax to write database queries without knowing or writing SQL to modify the database.

Laravel uses a Blade Template engine that is simple yet robust compared to most PHP templating engines. It provides convenient and easy-to-use shortcuts for general PHP functions and important features such as template inheritance and displaying data.

React is a popular front-end JavaScript framework used to build reusable UI components. It is a web app development framework that focuses on creating reusable view components which display the data to the user that may/may not change over time. React is generally paired with backend frameworks that work on the MVC design pattern and is used for the ‘V’ (View) aspect. It follows a unidirectional data flow that helps reduce boilerplate code significantly.

What makes React an ideal frontend UI framework instead of Vue.js and other such frameworks? Why is React.js leading the market, and how is it better than other options? Here are some of the best React.js features that make it an ideal choice –

React breaks down the UI into different components; each component has its state and props, which can be worked on individually. This helps break down complex projects into smaller and manageable tasks and processes.

Unlike most front-end frameworks, React uses virtual DOM, which creates a virtual representation of actual DOM. Whenever developers modify the web app, the entire UI gets re-rendered in virtual DOM representation. It checks the snapshot of the previous DOM instance to the current one for any differences. Once the differences/updates have been spotted, the real DOM only re-renders those elements. This makes the app faster with no memory wastage.

Choosing the right framework to go with Laravel is difficult as so many options are available in the market. You can pair Laravel with Angular, Vue, and many other frameworks. And they might be an ideal combination for your requirements as well. But using Laravel with React unlocks many benefits for your web app development project.

Benefits of using Laravel with React.js

There are many benefits of using React.js with Laravel as they both are leading frameworks in their respective fields. They bring some impressive advantages to the web app development project, such as –

React.js supports server-side rendering, making it the most SEO-friendly framework; hence when you use React as your frontend view aspect with Laravel handling the backend and creating REST API endpoints, you won’t need to use it to worry about adding additional features to handle SEO related problems.

Laravel is known for its in-built robust security system that helps web apps stay protected from unwanted malware and other threats.

React is the best framework for creating apps with aesthetic and functional UI that encourages users to spend more time on the app.

Both Laravel and React are designed and developed with performance in mind. They come with different features that focus on performance optimization of your overall web app, making it faster to load and manage heavy content files with ease.

Integrating Laravel with Vue makes sense from an economical and faster time-to-market aspect. React is a JavaScript framework that only requires developers to have basic knowledge about CSS, JavaScript, and HTML; hence it is easy to find and hire Reactjs developers. Whereas Laravel is also a tested and globally known backend framework, many available talents specialize in Laravel. Hence it is easy to find, retain or replace the right talents and get started with your project since both frameworks have short learning curves and abundant availability.

Using Laravel with React.js opens up many new opportunities and possibilities to build scalable, modern, secure, and appealing web apps. Hire Laravel developers and React developers from a credible IT company with experience working on such projects and the skills to integrate these popular frameworks according to your business needs.