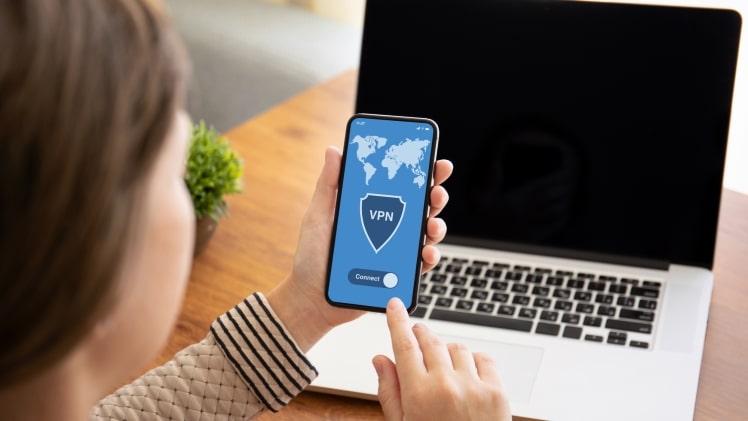 When you access the public network with your original IP address, you invite a bunch of threats your way which is bad news for your online privacy.

If someone is on to you, they can easily get hold of your sensitive information when you click something on the web you shouldn’t have or if you connect to an unsecured network. Other attacks like Malware, Ransomeware, and Phishing Sites also come into play.

And even if no one is trying, you’re still vulnerable to many hazards on the internet.

Your traffic can be monitored by your internet service provider and your browser history can be sold to concerned parties.

Websites can even track you and build a persona to analyze your purchasing behavior. So that you can be targeted by relevant ads to keep their sales figures up.

All this can be avoided if you use a VPN. A VPN is a powerful tool to keep you anonymous on the web while you surf the internet freely, breaking barriers.

Using a VPN connection is easy. You just need to sign up for a reliable VPN provider, download their VPN app on your device, and you’re all set.

And if you don’t prefer an always-on VPN app on your device, you can manually set up a VPN, or you can even create your own VPN server on your router to encrypt the traffic of every device that is connected to your network.

You will also be covering the devices that have no support for native VPN apps like your TV, Gaming Console, or your IoT-based Refrigerator.

But first, you need to make sure that you sign up for a trusted and reliable VPN provider.

So here are some of the names which are best in business.

ExpressVPN is based in the British Virgin Islands, created in 2009. It always roams in the top five spots of the best VPNs.

With a count of more than 3000 server locations, ExpressVPN covers all the major countries like the United States, France, Italy, Singapore, Japan, the Netherlands, Thailand, the UK, and many more.

It has a monthly plan of $12.95, a six-month plan of $60, and a one-year plan of $100. All the payments are required upfront when signing up for an ExpressVPN subscription plan. But all the plans are covered with a 30-day money-back guarantee offer so you can always get a refund if you’re not satisfied with the services.

Unlike other VPN providers, ExpressVPN has a dedicated app for routers. Also, it is compatible with all the major operating systems including Windows, Mac, iOS, Android, and Linux.

You can easily unlock major streaming platforms and Live TV platforms with ExpressVPN. It also has a MediaStreamer feature which is great for streaming movies as it only geo-spoofs your location without encrypting your traffic, so you will not face any speed issues while watching your favorite movie.

ExpressVPN has a strict no-log policy and one of its servers has also been investigated by the Turkish authorities from which resulted in the company using volatile memory so there are no chances of customer logs being tracked.

NordVPN is based in Panama where there are no laws for data retention. It is the most secure VPN with a pool of more than 5000 servers. And that’s the reason it is considered to be the best VPN for streaming platforms.

You can watch your favorite movie or TV show on any streaming platform including Netflix, Hulu, HBO Max, BBC IPlayer, Amazon Prime Video, or Disney+.

Not just this, it also works flawlessly on Live TV platforms including Sling TV, fuboTV, Hulu Live, or YouTube TV.

You can use a single subscription plan on six different devices simultaneously, it doesn’t matter which platform you’re using it on as NordVPN is compatible with Windows, Mac, iOS, Android, and Linux.

And if you talk about the features, NordVPN has a lot of amazing features like Double VPN, which encrypts your traffic twice to maximize your online security. CyberSec, which blocks ads and other malicious attacks to keep you safe on the web.

It also has a Smart DNS feature that allows you to stream movies and TV shows without decreasing your bandwidth speed. So you can enjoy your movie night with no buffering screens.

Surfshark is not an old player like other major VPNs but it sure made its way up to the top with its satisfactory services to the users.

It is also based in the British Virgin Islands and it’s considered to be the most featured-pack VPN of all time.

You can get a monthly plan of Surfshark VPN for $12.95 and it also offers a two-year plan costing $60 which is great and cost-effective if you compare it to other VPN providers.

Unlike other VPN services, Surfshark has no limits on simultaneous connections. That means you can connect as many devices as you want with a single subscription to Surfshark VPN.

This method can come in handy if you want to cover all the devices of your household without signing up for an extra account.

It has a split-tunneling feature called Whitelister so you let some apps bypass the VPN connection and not turn off or on the VPN multiple times.

With Surfshark’s MultiHop, you can make your online traffic hop through two VPN servers to strengthen your online security more.

To test Surfshark, we recommend you sign up for a monthly plan and test the VPN yourself. And if you are not satisfied with the services, you can always get a refund as Surfshark offers a 30-day money-back guarantee.

Although all the VPNs described above are the best in business, you should still brainstorm and check why you need a VPN in the first place. Choosing a VPN that offers the right features for your VPN needs can work like a charm. But if you need a VPN for general purposes, choose any of the above.